How and where does fertilization occur?

In humans, the natural fertilization of the ovum occurs in the farthest part of the Fallopian tubes. Normally, when you ovulate, the egg will be available to be fertilized only the following 12 or 24 hours. This process occurs on the day 14 menstrual cycle when the cycles are regular.

Thus, it is ideal that when this oocyte is released after the peak of the LH hormone, there are already sperm in the fallopian tubes ready to fertilize this oocyte. When the sperm meets the egg, it will first have to pass several layers of cells that surround this mature oocyte and finally penetrate the wall of the egg called the zona pellucida and fertilize the female gamete and thus produce an embryo.

What happens if no egg and sperm are found in the fallopian tubes?

This is a very common infertility problem. Here I name some of the causes:

Options to ensure the fertilization procedure

But we don't just have to do in vitro fertilization, since this procedure involves leaving the oocytes with a calculated concentration of sperm so that fertilization occurs naturally in a culture medium. If not, if we want to ensure that the sperm enters the egg, we have to microinject it, and therefore, do ICSI.

ICSI is the acronym for sperm microinjection. and it is a part of IVF in which this intracytoplasmic injection of sperm is produced in the laboratory, thus seeking to ensure the rate of in vitro fertilization. 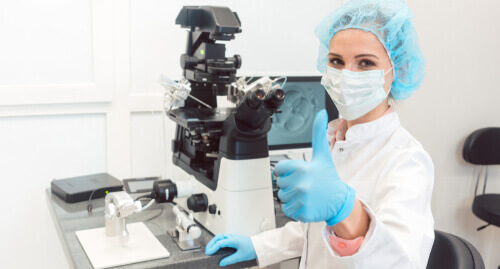 Medical treatment to obtain the oocytes

If the pregnancy does not arrive or there is a diagnosis of infertility, it is important that you go to expert fertility professionals in case they consider that you should undergo in vitro fertilization treatment.

The procedure of the Ovarian stimulation has several phases. First of all, before starting a stimulation to obtain the oocytes, they will ask you for a list of blood tests in order to study both members of the couple and give you medical advice regarding assisted reproduction. In this way, it is also studied which is going to be the most appropriate drug administration for each woman's profile to stimulate her ovaries, obtaining the greatest number of ovules, avoiding complications such as ovarian hyperstimulation syndrome.

Once the first phases of the medical study of in vitro fertilization have passed, the team of professionals will prescribe a series of medications to stimulate the ovaries and will ask you to go to a consultation to control the number of follicles and their growth and development. through vaginal ultrasound.

When these follicles have already grown enough and the respective control has been done, it will be the time to obtain these oocytes. These are obtained under sedation through ovarian puncture. What they will do is aspirate the follicular fluid where the embryologist will look for the ovules to later fertilize and assess the development of the embryos.

Once these oocytes are found, they will be prepared to be fertilized with the semen of the partner or a donor. To carry out in vitro fertilization, adapted microscopes are used that allow the intracytoplasmic injection of sperm from the ovules, in a controlled culture medium so that fertilization occurs and to assess the following day whether or not there has been a reversal of fertilization of the oocyte.

Conventional in vitro fertilization or ICSI?

First of all we have to clarify that when we make a In vitro fertilization is not synonymous with doing the icsi technique, the one we have mentioned that is the microinjection of the sperm into the woman's egg, thus ensuring that the sperm has passed all the cells and layers of the oocyte.

Conventional in vitro fertilization is one in which sperm and oocytes are brought together and fertilization is allowed to occur naturally, that is, the penetration of the sperm occurs without any human help. This method is carried out when there is a good quality of the semen, if the couple wishes or they can even decide to carry some oocytes through this type of fertilization and others through icsi.

La in vitro fertilization with icsi, it is the whole ovarian stimulation procedure that we have said and that it will be the same as when we do conventional in vitro fertilization, but in this case, we add the phase of puncturing the oocytes with a sperm selected by the embryologist, the reproduction professional assisted responsible for the laboratory and the development of the embryos. 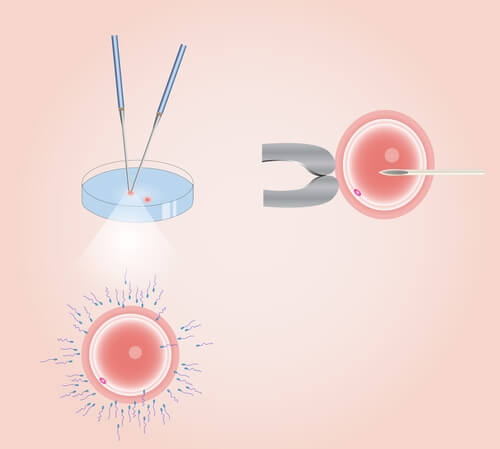 What does it look like if an egg is in vitro fertilized?

In order to assess whether an egg has been fertilized, we we have to wait for the next day after obtaining the oocytes of the woman after extraction by ovarian puncture and after fertilizing them with sperm with or without icsi.

The way to know if the oocyte has been fertilized is by visualizing whether two pronuclei have formed inside it. These structures will contain the genetic material of the oocyte and the other of the sperm and the chromosomes are being intertwined.

When the assisted reproduction professional sees these two structures, he can confirm that there has been fertilization and will count how many embryos have been formed from the total fertilized eggs. We can only observe this fact under a microscope when there is fertilization through the in vitro technique, but the same thing happens inside the woman's body when conception occurs naturally.

Preparing for embryo transfer to the uterus

We have to take into account that the final number of embryos is usually not the same number as oocytes recovered after ovarian stimulation and that there are several parameters that influence this.

When the embryos have reached their day 3 or blastocyst stage of development, they are ready to be transferred to the woman's uterus through embryo transfer through the vagina and depositing them inside the uterus. This process is usually quick and painless and one or several embryos may be transferred. Your medical team will discuss it with you at all times and in each phase of the cycle. 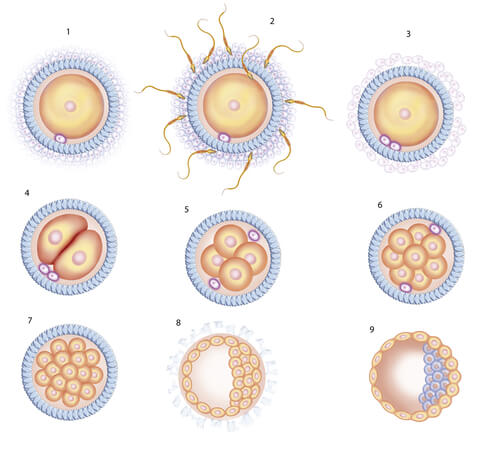 So if we do IVF, what happens to the tubes?

The important thing is that the area of ​​the uterus is evaluated by your medical team and thus be able to carry out ovarian stimulation as fruitful as possible while also wanting to transfer an embryo of the best possible quality after in vitro fertilization, reducing the number of attempts and maximizing the chances of pregnancy.

Notebook of emotions for fertility processes

If I have few sperm, can IVF help me?

Of course. in fact, in vitro fertilization began to be developed for two specific patient profiles, women with tubal problems and men with a low count in semen or with very little mobility.

In addition, today, when fertilization takes place outside the woman's body, it can be given by gametes, oocytes or spermatozoa, from a donor. Thus allowing many couples who could not be parents to become parents and also allowing new family models.

Another group of patients that has been able to benefit greatly from this type of treatment are patients who, for a medical reason, want to select the embryo to be transferred to the uterus so that it is not affected by any serious genetic disease. In these cases, the genetic load of the embryos can be studied fertilized in order to have a greater probability of obtaining a pregnancy and a healthy baby.

How much does in vitro fertilization cost?

You should know that assisted reproduction treatments are treatments that require many highly specialized professionals and a very expensive material and conditions with what they are not at all treatments that we can consider economic.

In addition, apart from the treatment, we must also pay for the ovarian stimulation medications.

It is important that if you are going to schedule a fertility treatment, you calmly study the budgets and assess when to do it, as well as which complementary treatments are most suitable for you.

It may interest you:

This website uses cookies to improve your experience while browsing the website. Of these, the cookies that are classified as necessary are stored in your browser, as they are essential for the functioning of the basic functionalities of the website. We also use third-party cookies that help us analyze and understand how you use this website. These cookies will be stored in your browser only with your consent. You also have the option to opt out of receiving these cookies. But opting out of some of these cookies may affect your browsing experience.
Necessary Always activated
Necessary cookies are absolutely essential for the website to function properly. These cookies guarantee basic functionalities and security features of the website, anonymously.
Functional
Functional cookies help perform certain functionalities, such as sharing website content on social media platforms, collecting comments, and other third-party features.
Performance
Performance cookies are used to understand and analyze the website's key performance indexes, helping to provide a better user experience for visitors.
Analytics
Analytical cookies are used to understand how visitors interact with the website. These cookies help provide information on metrics, the number of visitors, the bounce rate, the source of traffic, etc.
Rack
Advertising cookies are used to provide visitors with relevant marketing campaigns and advertisements. These cookies track visitors across websites and collect information to provide personalized advertisements.
Other
Other uncategorized cookies are those that are being analyzed and have not yet been classified in a category.
SAVE AND ACCEPT